Cynthia McKinney: That Audacious Black Woman Standing With The People A New Declaration of Independence 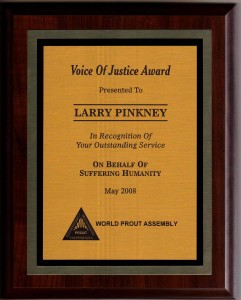 Larry Pinkney was presented the Voice of Justice Award in absentia at the First Summit of the World Prout Assembly (Building a New World: Radical Visions) which took place May 22-25, 2008 in Radford, Virginia.

The other 4 recipients of the WPA Voice of Justice Award were Lynne Stewart, Tom Feeley, Stephen Lendman, and Gary Corseri.

Larry Pinkney is a veteran of the Black Panther Party, the former Minister of Interior of the Republic of New Africa, a former political prisoner and the only American to have successfully self-authored his civil/political rights case to the United Nations under the International Covenant on Civil and Political Rights. In connection with his political organizing activities, Pinkney was interviewed in 1988 on the nationally televised PBS News Hour, formerly known as The MacNeil/Lehrer News Hour, and more recently on the nationally syndicated Alex Jones Show. Pinkney is a former university instructor of political science and international relations, and his writings have been published in various places, including The Boston Globe, San Francisco BayView newspaper, Black Commentator, Intrepid Report, Global Research (Canada), LINKE ZEITUNG (Germany), 107 Cowgate (Ireland and Scotland), and Mayihlome News (Azania/South Africa). He is in the archives of Dr. Huey P. Newton (Stanford University, CA), cofounder of the Black Panther Party. For more about Larry Pinkney see the book, Saying No to Power: Autobiography of a 20th Century Activist and Thinker, by William Mandel [Introduction by Howard Zinn]. (Click here to read excerpts from the book.)

One Response to World Prout Assembly Voice of Justice Award