One man’s fight not to go home

Larry Pinkney was featured in Maclean’s magazine (Canada), January 4, 1982, Page 27, in an article entitled One man’s fight not to go home, by Linda McQuaig.

Excerpts from the article (image below):

For the past five years, Larry Pinkney has languished in jail in Mission, B.C. During that time, he vigorously maintained that Canada has denied him his full civil rights. But it was not until the United Nations Human Rights Committee in Geneva added its weighty voice to his claim last month that officials in Ottawa were obligated to pay attention.

[…] While the normal immigration procedure would allow him to choose the country to which he is to be deported, Immigration Minister Lloyd Axworthy has used his ministerial powers to specify that Pinkney must be deported to the United States–despite the fact that Pinkney claims to be a political refugee from that country.

[…] To bolster his story, Pinkney points to U.S. government evidence revealed last year under the freedom of information laws indicating that the FBI used a wide range of “dirty tricks” to disrupt and discredit other black activists in the United States.[…]

[…] [Larry Pinkney] is hoping that the UN ruling may encourage Canadian authorities to let him be deported to the country of his choice. 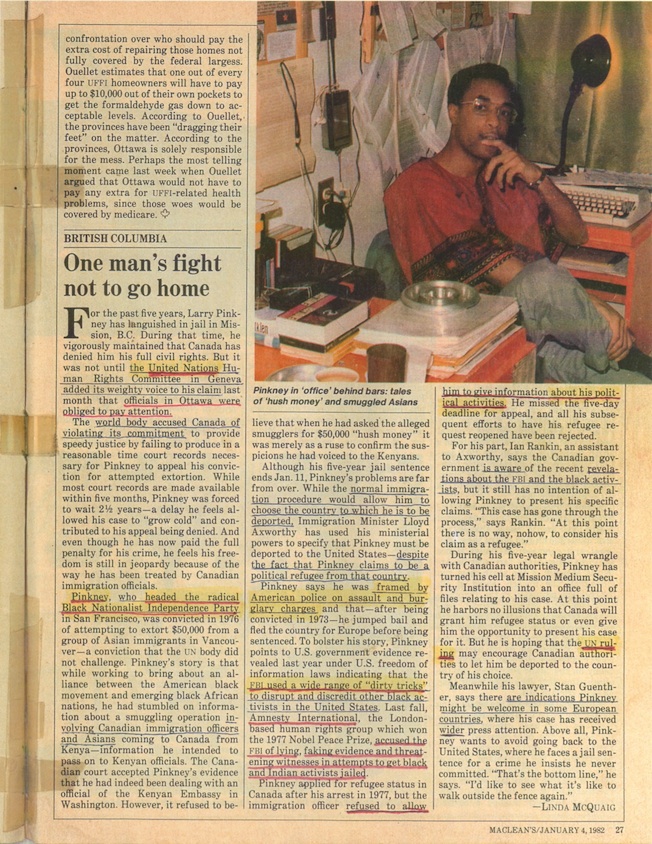