Obama and the Corporate Two-Party Dictatorship

Published in Issue 405 of The Black Commentator on Dec 9, 2010
Quoted in the January-February 2011 (PDF) Issue of BCA Dispatch (Boston-Cambridge Alliance for Democracy Newsletter) (Image of the front page below)

“So if the idea of achieving a true political equality eludes us in reality – as it continues to do – there is still available that fictional vision of an ideal democracy in which the actual combines with the ideal and gives us representations of a state of things in which the highly placed and the lowly, the black and the white, the northerner and the southerner, the native born and the immigrant are combined to tell us of transcendent truths and possibilities such as those discovered when Mark Twain set Huck and Jim afloat on the raft.”
-Ralph Ellison

Hope must never be confused with vision. And it is an actualized, collective vision – for real systemic change – that everyday Black, White, Brown, Red, and Yellow people must employ if this nation is to pull back from the precipice of economic, social, and political disaster and chaos. Nothing short of this will suffice in these perilous times.

The United States of America, has within the relatively short span of two years, sunk – and continues to sink – to its lowest idealistic, social, political, and economic level thus far in the 21st century. Some attach the blame for this solely to George W. Bush, some attach blame solely to Barack Obama, some to both, referring to Obama’s administration as the “third term of Wubbya.”); and while it is certainly accurate that they are (as this nation’s former and current chief executive) in very large measure responsible for this ongoing catastrophe and quagmire – they are not alone in this responsibility. Their accomplices include the avaricious corporate Wall Street and military elite of this nation, politicos of both political parties, so-called ‘educational’ institutions, and the ever-willing corporate-stream media. Moreover, it was (and to some extent still is) many of we the people who like sheep being herded to slaughter, allow[ed] ourselves to be mesmerized and duped by a cynically clever and articulate politician whose skin tone happens to be a shade or two darker than the other politicians to whom we had grown accustomed to and fed up with. So many – so fervently – wanted to believe in this Obama politician who (rhetorically at least) seemed to represent a fresh idealism, but who was and is utterly devoid of an actualized vision that uncompromisingly serves everyday people. So many wanted to believe, while so few were willing to critically think and question. Thus, today this nation has moved backwards to a future that is increasingly worse than its past.

While an estimated 450,000 home foreclosures occur nationally every month, joblessness continues to rise, U.S. foreign wars and/or occupations drag on and intensify, corporate hegemony, glut and greed have replaced even the semblance of an egalitarian ‘American’ democracy, political prisoners continue to languish in local, state and federal gulags while prison populations in general bulge at the seams, and the supposed Constitutional rights of the people of this nation have been shredded and made essentially null and void, all in the name of combating the very “terrorism” that the policies of this nation’s misleaders are constantly fanning, globally. Akin to Ralph Ellison’s ‘Invisible Man,’ the horrible pain, suffering, and legitimate needs & aspirations of everyday Black, White, Brown, Red and Yellow people collectively, are in fact invisible to the cynical and shrewd politicians of this land. Yes, as this nation draws close to the year 2011, it bears reiterating that ‘America’ has indeed moved backwards to a future that is increasingly worse than its past. However, it does not have to remain this way.

It is incumbent upon everyday people to remember that hope and idealism that is devoid of a clear actualized vision is mere fantasy. Nothing else. Moreover, it is also mere fantasy to succumb to the notion that fundamental change, that serves the interests of everyday people, can be brought about without over-all systemic change.

It is time to dispense with – and quickly – self defeating liberal notions. For example, the election of Barack Obama as president is no more the culmination or fulfillment of the ongoing civil/human rights struggle in this country than was the installment of Clarence Thomas as a Justice in the U.S. Supreme Court. We must dispense with these ridiculously dangerous and absurd liberal notions. Those so-called “changes” were merely cosmetic and represent no real or fundamental systemic change. Indeed, if anything, those said changes represent a psychological strengthening of the (Democratic and Republican) two-party dictatorship – which is precisely the opposite of much-needed, fundamental systemic change. We must dispense with liberal notions, engage in critical thinking, and act accordingly. Otherwise, we will forever be at the mercy of these corporate, bloodsucking political parties and their slimy political puppets; finding ourselves as perpetual political ping-pong balls, supporting perpetual foreign wars at the behest of a greedy and amoral corporate / military elite, even as the quality of life for everyday people is steadily emaciated in this nation.

The constant fake battles between the Democratic and Republican parties [i.e. the Republicrats] are meant to distract, dis-empower, and manipulate everyday people, keeping us in a perpetual state of dependence and servitude to these corporate political parties. For example, when one considers the legitimate need to protect social security benefits and unemployment insurance for everyday people in this nation – there is absolutely nothing about which to debate. Yet, the Obama regime and the wily Democrats and Republicans engage in a pernicious fake debate over social security and unemployment insurance, etc. – while simultaneously supporting the shelling out of trillions of dollars of everyday people’s money for corporate welfare to the corporate elite – with no serious or meaningful debate whatsoever. This is but another example of the insidiousness and criminality of the corporate two-party dictatorship in this nation.

Barack Obama is neither weak nor is he stupid. He knows exactly what he is doing. He is cynically carrying out the precise bidding of his corporate / military masters, while rhetorically faking-out everyday Black, White, Brown, Red, and Yellow people with his endless bait and switch tactics.

Everyday people in this nation must choose social, economic, and political justice over the chicanery of the Obamaites and their corporate Democratic and Republican Party fox and wolf counterparts. The time is here for systemic change, and nothing less. This change will only be brought about collectively by everyday people with an actualized vision for the present and the future. Notwithstanding the endless subterfuge, arrogance, and chicanery of Obama and his Democratic and Republican Party colleagues, our task remains to change the course of history by unflinchingly struggling for a present and future free of environmental degradation, and military & corporate insanity. We must change the course of history for Mother Earth and for the people who inhabit her!!! We can and we must do this!

Let us combine “the actual” with “the ideal” to bring about a different reality. Let us, be invisible no more! Let us transcend mediocrity. Organize, educate, and agitate! At stake is the present and future of humankind. Yes, at stake is our humanity and very existence!

Onward my sisters and brothers! Onward! 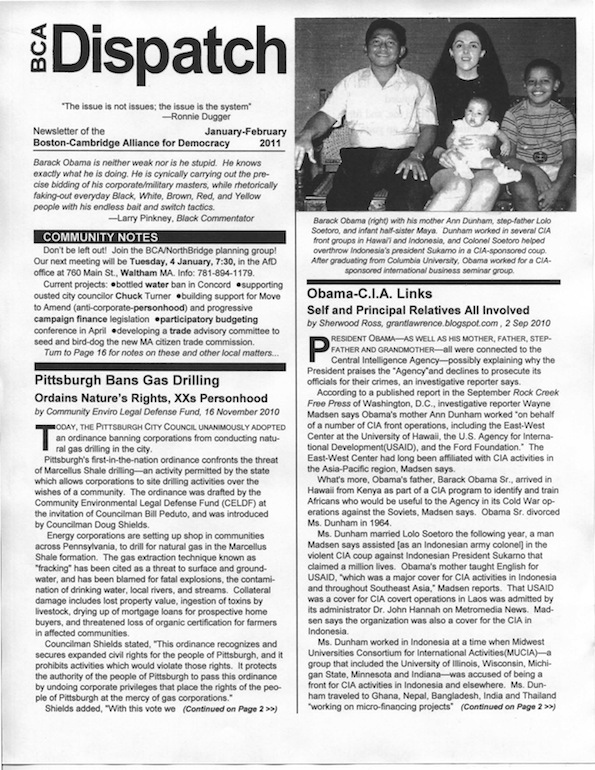