Conflicts Rise With Visitor to U.S.S.R.

Larry Pinkney organized a speaking tour in Minnesota for author and activist, William Mandel.  The following is an article entitled ‘Conflicts Rise With Visitor to U.S.S.R.’ by Sharon Warwick, published in City College News (Minneapolis Community College), Volume 21, Number 7, Page 4, on May 5, 1986 (image below):

Conflicts Rise With Visitor to U.S.S.R.
by Sharon Warwick

Tempers flared and harsh words were spoken at a lecture given by William Mandel in Memorial Hall, April 3. Mandel, a journalist, professor and author has recently written a book, “Soviet But Not Russian.” In his lecture and accompanying slide presentation he talked about the various peoples of the Soviet Union pointing out that not all Soviet people are white, that half are not Russian and that many do not speak the Russian language. In describing the diversity of the ethnic backgrounds he stated he based his conclusions on evidence drawn from historical information of the people. Mandel visited the Soviet Union ten times since 1931 and has traveled extensively throughout the country.

Controversy over Mandel’s visit to MCC began even before the evening lecture. Nick Maras, director of continuing education at the college said he received four or five calls of protest prior to the speech but that callers would not identify themselves. A few murmurs of dissent were heard in the audience during the speech but it wasn’t until Mandel invited questions that the disruption occurred. A note was passed to Mandel asking his opinion of General Grigorenko, the only Soviet general ever exiled. Mandel responded that he believed the man had been declared schizophrenic. At that point several members of the audience stood and began shouting obscenities at Mandel. A man identifying himself as Larry Pinkney, a former Black Panther, then addressed the group and asked that Mandel be allowed to present his views on the Soviet Union. Shortly thereafter, the dissenters in the audience left. Although never clearly identified, Mandel said later he believed that the group was Ukrainian. Some of the protest seemed related to the fact that Mandel was at one time a card-carrying Communist.

The Mandel lecture was the first of a continuing series of lectures to be presented at MCC. The continuing education department, student services and the Minnesota Humanities Commission co-sponsored the event. 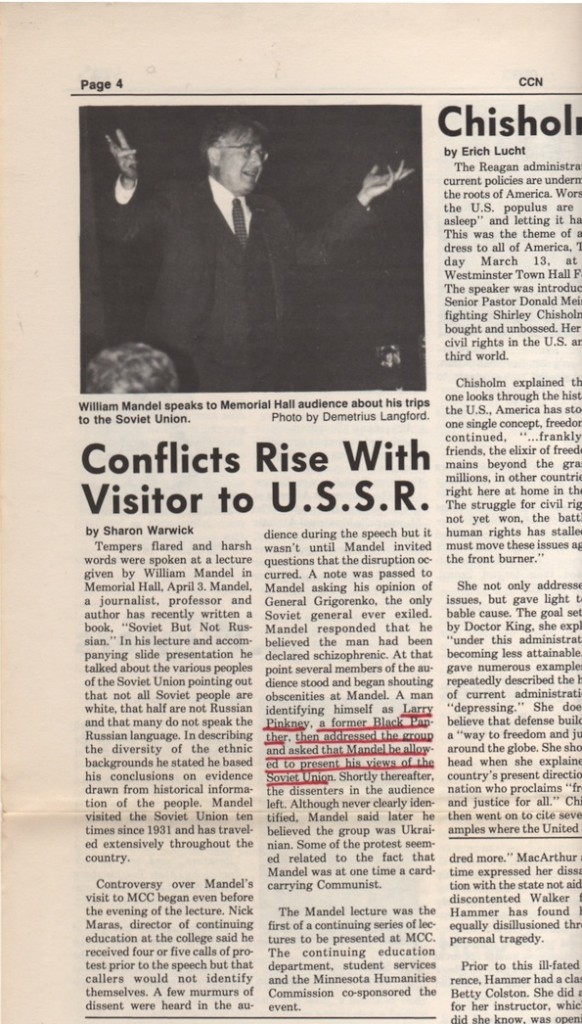 Larry Pinkney is a veteran of the Black Panther Party, the former Minister of Interior of the Republic of New Africa, a former political prisoner and the only American to have successfully self-authored his civil/political rights case to the United Nations under the International Covenant on Civil and Political Rights. In connection with his political organizing activities, Pinkney was interviewed in 1988 on the nationally televised PBS News Hour, formerly known as The MacNeil/Lehrer News Hour, and more recently on the nationally syndicated Alex Jones Show. Pinkney is a former university instructor of political science and international relations, and his writings have been published in various places, including The Boston Globe, San Francisco BayView newspaper, Black Commentator, Intrepid Report, Global Research (Canada), LINKE ZEITUNG (Germany), 107 Cowgate (Ireland and Scotland), and Mayihlome News (Azania/South Africa). He is in the archives of Dr. Huey P. Newton (Stanford University, CA), cofounder of the Black Panther Party. For more about Larry Pinkney see the book, Saying No to Power: Autobiography of a 20th Century Activist and Thinker, by William Mandel [Introduction by Howard Zinn]. (Click struggle-and-win.net Bill Mandel on Larry Pinkney to read excerpts from the book.)