A Caucus for the Community: The San Francisco Black Caucus Serves the People

Larry Pinkney is featured in an Oct 21, 1972 (Saturday) The Black Panther: Intercommunal News Service article entitled ‘A Caucus For The Community: The San Francisico Black Caucus Serves The People’  Vol. IX, No. 1 , Pages 6 & 12 (includes photo of Larry Pinkney and Kirk Taylor – see below):

In the Black community, numerous organizations with various philosophies, political ideas, and methods of action have been formed in an effort to change the oppressive conditions that exist. But, due to the fact that those who govern our lives care little about us (or how we live), informing them of our needs seldom brings about the desired changes. For this reason, various methods of protest against this unjust system must be used. Some Black organizations do little, if anything, to change the government or help our people in understanding the true nature of this repressive society. However, those progressive organizations that do aid in the survival of our people and the process of ending oppression are always opposed by the protectors of the ruling class — the police forces, the FBI, the courts and all the other parts of the repressive machinery of the government. For trying to better our conditions, Black organizations and their members are investigated, harassed, illegally railroaded to jail, and many times beaten or killed.

The San Francisco Black Caucus is an organization which works to solve the general problems existing in the Black community, particularly employment problems that Black people face. The Caucus was organized in September 1970, and has since developed as a positive force in the San Francisco Black community. They have a membership of 500 people. The Black Caucus has been instrumental in getting Black people hired to top administrative positions in the city government and the city health care system. They have exerted pressure to have Black people hired to certain jobs and have protested the firing of several Black workers in the city. Because of their political activity, repression by the combined forces of the police departments of the Bay Area (which includes San Francisco, Oakland, Berkeley and Richmond) has increased in the form of illegal surveillance and even illegal arrests.

The most recent act of harassment was the arrest of Kirk Taylor and Larry Pinkney, who is co-chairman of the Black Caucus. Brothers Larry and Kirk were driving back to San Francisco from nearby Richmond. On their way through Berkeley, they were stopped by Berkeley policemen who illegally searched their car without a warrant or permission, seized their weapons, (which were legally registered), and intimidated them at gun point. They were both taken to the Berkeley City Jail without being told whether or not they were under arrest. Larry was charged with carrying a concealed weapon; he was held overnight. The charges were dropped and Larry was released the next day. Kirk was charged both with carrying a concealed weapon and receiving stolen goods. To show their ability to fabricate any lie in order to hold a Black person behind bars, they also charged him with possession of narcotics and possession of a stolen credit card. Brother Taylor did not even know of the charges against him until the police had taken him to the station.

Brother Kirk was held on $8,500 bond and jailed for two days until it was reduced at his arraignment. At that time it was made clear that there was no case against him. The District Attorney’s office informed Kirk that “the deal that the D.A. is willing to make” would be to drop all the charges except the weapons charges, sentence him to 90 days with 60 days suspended and two years probation. This proved that the charges stemmed from their desire to harass and intimidate members of the Black Caucus.

Many other Black Caucus members are under surveillance, Robert Clark, chairman of the organization is constantly followed, and has been stopped and harassed by police on numerous occasions. One day, after he had brought some new tires for his car, he was stopped, under the pretense of “worn tires”. Three months ago, two members of the group were arrested while coming out of a meeting for no reason whatsoever. They were taken to San Francisco Jail and released.

Perhaps, the San Francisco police see the Black Caucus as a threat to their power. When the organization was formed, the specific purpose was to stop the arbitrary firing of Black people, and to obtain jobs for our people. Soon after its inception, members of the Black Caucus protested at different businesses in the North Beach area of San Francisco. There, Italians own and control most of the businesses in the (predominately Black) community, and refuse to hire Black people.

Another major action by the Caucus occurred last November, when they picketted an Atlantic-Richfield (ARCO) service station for not waiting on a Black sister. Members also marched on the main ARCO office in San Francisco and refused to leave until the racist station manager’s franchise was revoked. They were also protesting Atlantic-Richfield’s exploitative involvement in South Africa. Due to this action, the service station closed.

The organization has also put pressure on the racist hiring practices of San Francisco General Hospital. Although 65% of the hospital workers are Black, very few Blacks are on the staff, and even fewer are hired. Due to political action by the Black Caucus, San Francisco General may lose its accreditation for not hiring Black people to administrative positions. There are presently four positions open for administrative assistants, and S.F. General has left them all vacant for a year, rather than to hire Black people in those positions, as was demanded by the Caucus. The organization plans to put more pressure on San Francisco General Hospital in the future.

Also, the Black Caucus was instrumental in setting up negotiations between Foremost Dairy’s management and Rose Abrams, a Black sister who was unjustly fired. (See Black Panther Intercommunal News Service, Saturday, September 16, 1972). The Caucus has many practical protests planned for the future, one of which is to run candidates for political offices.

ALL POWER TO THE PEOPLE 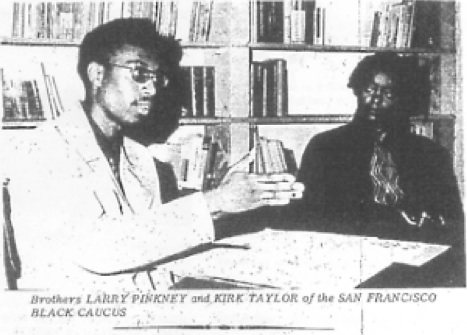 LPA Editor’s note: The photo in the article is of Larry Pinkney and Kirk Taylor of the San Francisco Black Caucus at the Black Panther Party Office, Oakland, California. Photo by Rahn “Ducho” Dennis (1934-2014)